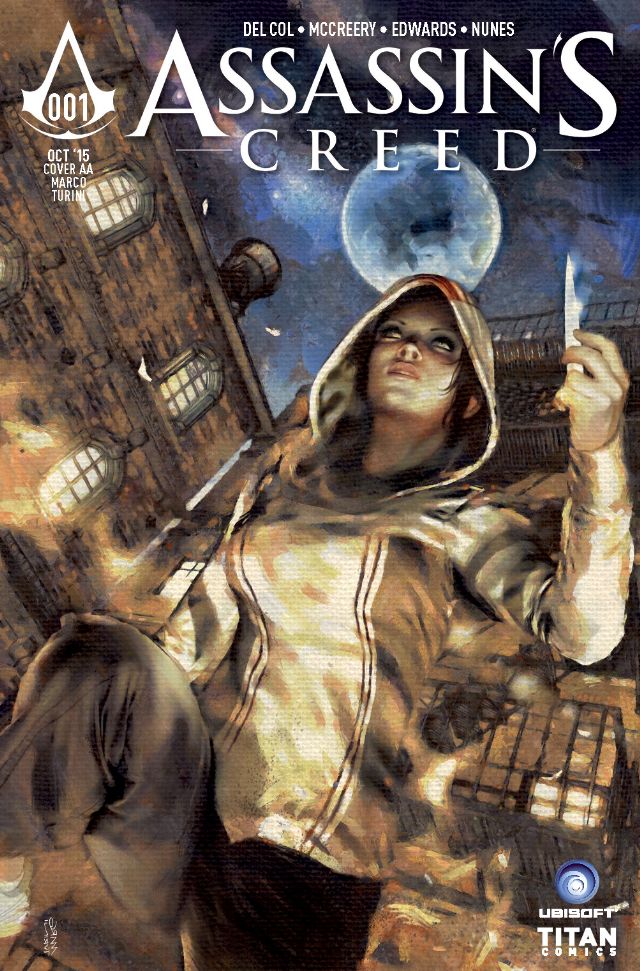 As an avid gamer, I was super excited about this comic series, which is based on the Assassin’s Creed video games.  Unfortunately, that excitement was short lived as I was  introduced to the boring storyline and bland characters that  encompass the story. The series focuses on Charlotte de la Cruz, a young woman just trying to forge her own path in the  world. She plays a video game that ends up being a  recruitment/testing tool for The Brotherhood, through which  they gather data about her using her VR headset. They need her  to connect to the Animus, which will allow her to experience  the life of her ancestor in order to explore the past to find an  ancient relic before the Templar find it. Pretty standard plot for  an Assassin’s Creed story.

This comic failed for me when she heads into the Animus and  we see her ancestor…Tom Stoddard. Yeah, her ancestor is a  angsty white man who seems to have a dislike for women. See,  I’m sure they can make it interesting a few issues down the line,  but they had so much potential to work with. Instead of making her ancestor a kick-ass woman assassin, they decided to go with the tried-and-true angry white man. To add insult to injury, Tom’s contact in Salem, Massachusetts in 1692 is Jennifer Querry. So we do get our kick-ass woman in the past, but it would be a lot more interesting if she was the ancestor of Charlotte, in my opinion. Tom seems to dislike Jennifer immediately, treating her as if she’s stupid and untrained, which in turn makes the reader feel pity for her, rather than being interested and excited to learn more about her.

One of the main subplots of the comic is that Charlotte and Tom have clashing personalities. To be fair, there could be an interesting dynamic between Charlotte and Tom, but since they never meet, it’s wasted. We do get Charlotte’s commentary occasionally, but it almost seems useless to even include it since it will likely never pay off. In the first issue, Charlotte struggles with her ancestor’s choices: he doesn’t save a woman who is being hanged and Charlotte tries to force him to change that decision, which results in the Animus spitting her out and making her sick. Once she recovers, however, she heads right back into the Animus and we see nothing more of her trying to manipulate his actions; Instead, her thoughts are interjected over the action of the past, reminding the reader that she doesn’t like her ancestor.

Speaking of her ancestor, Tom Stoddard is boring. There isn’t anything remotely interesting about him, at all. He’s a generic white man holding a grudge that for some reason is misogynist. I mean, sure, he’s a ruthless killer, and he seems to be pretty cool, but other than that he has no personality. It’s only two issues in, and so it’s okay that we don’t know much about him, but I need a little more reason to either like or dislike him. He’s bland; his lack of personality makes me want to skip the rest of the series.

Charlotte de la Cruz could be interesting, but she’s shoved aside to introduce Tom. When we first see her, she’s playing a video game (that seems way more interesting than the rest of the story), and talking to some mysterious man online. She heads to an interview, and there’s a scene at a bank, and then she goes home and the Brotherhood show up to take her away from her boring corporate life. Her story is rushed so we can be introduced to Tom for no real reason other than to show us how boring he is.

The two (three?) bland Brotherhood members argue about Charlotte’s ability to use the Animus, but I didn’t really care. The dialogue is so rushed, and nothing is explained, and so, as a reader, I find myself not really paying attention. The entire reason they bring Charlotte in could be easily solved, as one of the Brotherhood points out, but instead the writers wanted to introduce us to this incredibly boring story about an incredibly boring man.

The comic is based on a video game series of the same name, and as such the story assumes the reader should know a little about that overarching plot. Sure, most of the readers will possess that basic knowledge, but the writers missed a great opportunity to introduce the world to new readers who don’t know much about the games. Instead, all the interesting tech stuff in the world, such as VR headsets collecting data, and the game being used as a testing ground and the fact that it’s based on actual memories (!) is rushed and not explained. They gloss over all the important and interesting stuff to bring us an extremely bland storyline from the eve of the Salem Witch Trials.

It is entirely possible that the series will get better, and I really hope it does. The world of Assassin’s Creed is super interesting and the concepts are cool, and I hope the series brings in some of the source material so others can learn about the world too. By far, the most disappointing thing for me was learning that Charlotte’s ancestor was just another generic angry white man with a grudge. I was super psyched to see a female assassin, but instead was slapped in the face with the wet fish that is Tom’s personality.

Copy for review graciously provided by the publisher

Kat
← Previous Story All New All Different Marvel: How are those first issues?
Next Story → Comic Review: Gwenpool Holiday Special