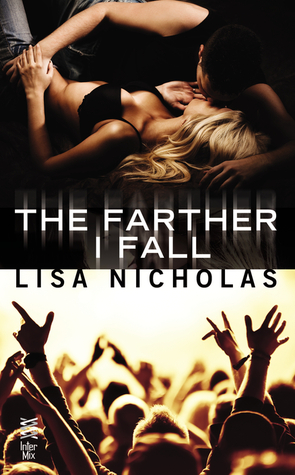 I admit I read The Farther I Fall

because I knew of the author from fandom. When I heard she wrote an original novel, I knew I had to read. And boy, am I glad I did. There is next to nothing that I disliked about the book. Kickass women, openly bisexual men, traditional gender role reversals! What isn’t there to love?

I’ve always been a sucker for romance novels, anyone that has taken a look at my Kindle can confirm that, but I often get tired of and bemoan the constant reusing of the same tropes. Woman needs help, strong man helps her, they fall in love. That’s the premise to almost every romance novel, but take the “man” and “woman” and switch them and you are closer to what The Farther I Fall is like.

The story follows Gwen, ex-British Army medic and current tour manager to ex-drug addict rock star Lucas. Gwen is supposed to be there to make sure Lucas stays out of trouble, but things start to get hairy when Lucas turns out to have a dangerous stalker. Gwen must protect him, and resist falling in love.

Gwen is everything I love in a heroine. She is strong, not just physically but emotionally too. She goes through a lot of growth, from being nightmare ridden to being able to find comfort and strength in someone else. The typical emotional arc you would expect from a romance, especially a romantic suspense novel.

Lucas, on the other hand, is very self assured. He is open about his sexuality and allure. It was easy to see how Lucas the rock star captivated his fans. Plus, before the novel’s start, he was screwing up his life with drugs and unprotected sex, but he knows he was doing wrong and was working to better himself. While some people may like their heroes perfect, I prefer mine imperfect, yet working on himself.

My favorite thing was actually their sexual relationship. While most novels have the male in the more dominant role, The Farther I Fall doesn’t go for this trope. Gwen easily dominates Lucas in bed. One of my favorite scenes had (spoilers and a bit NSFW) [spoiler]Gwen being busy with work, but Lucas wants to play. She forces him to lay on the bed and watch her masturbate without touching himself. When he begs too much she ends up gagging him with her panties and, eventually, holds his wrists down as she rides him. Lucas’ new found love of being ordered around makes me swoon.[/spoiler]

My only complaint of the novel is Gwen’s PTSD is only mentioned when it serves a purpose to the plot, particularly in the more suspenseful parts. The beginning of the novel implied that the nightmares she suffered were a nightly occurrence but once she gets on the road with the band there is next to no mention of them again until near the climax. It would have been nice to show that, though Gwen was doing better in life, PTSD does not just disappear and she is still working through her issues.

Gwen closed her eyes and let the warmth from the fire and from Lucas’s body seep into her. This was something entirely new. The people she chose to have around her in her everyday life were either exciting or soothing. There had been no one before who was both. The very same man who made her heart race and her thoughts grow dim with the rush of adrenaline could calm her with a brush of his lips against her hair. It meant something-something important and scary.

Overall I loved the book. Even before I knew the novel was originally a fanfic, I could see the influences of BBC Sherlock on the story. Elements of the characters shined through and that only enhanced my enjoyment of the writing. The sequel is set to be released in August and I am eagerly anticipating it. I would recommend this book for any loves of romantic suspense and who like their heroines strong and in charge. The panty melting scenes are just a bonus *wink*.

Let us know in the comments what you think. Would you read this novel?

The link for the book is to Amazon. As a member of the Amazon Affiliates program, What the Fangirl receives a small portion of the proceeds for all items bought using this link. All revenue earned via affiliate links is used to pay for the hosting of the website and the podcasts. Thank you for your support!